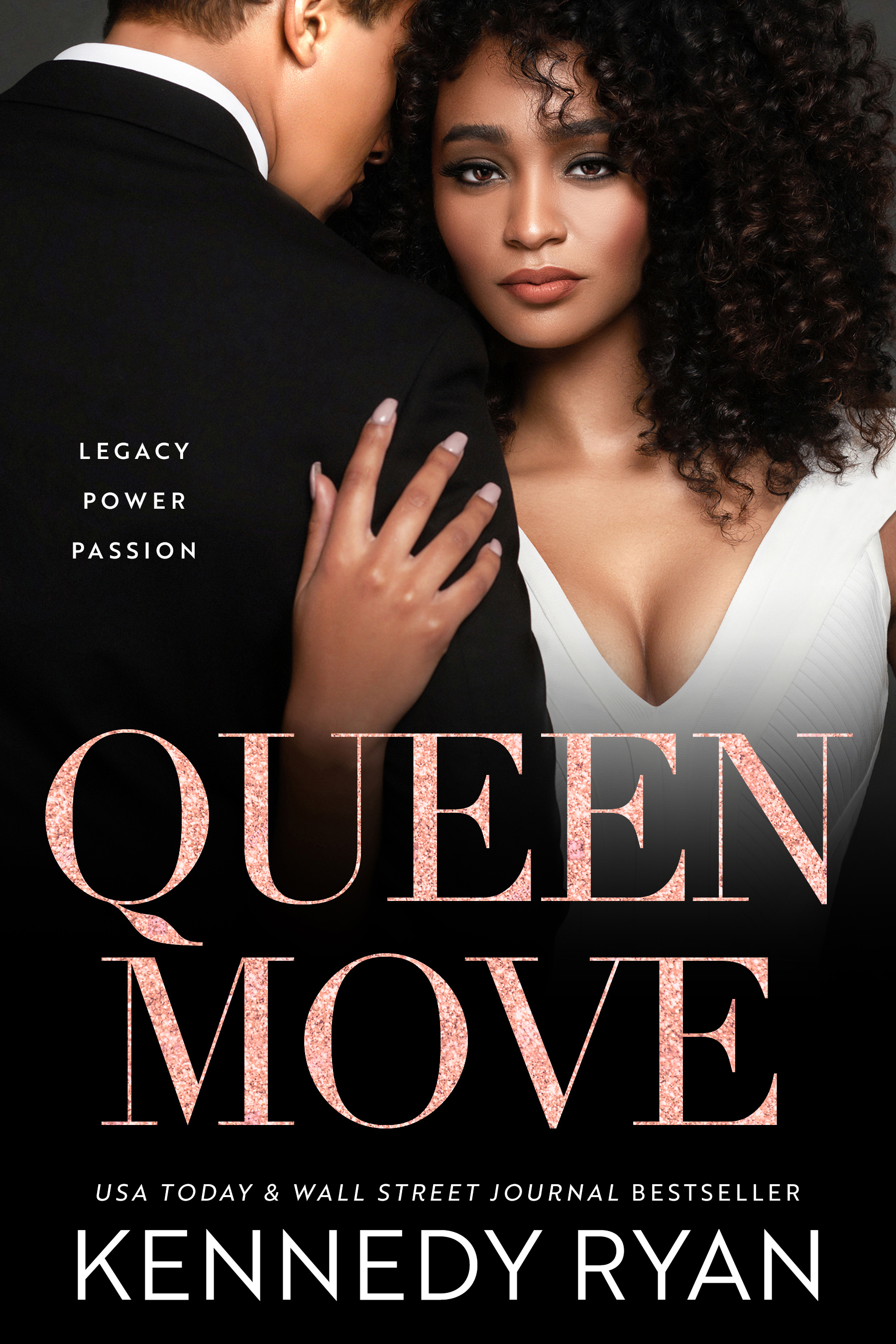 Dig a little and you’ll find photos of me in the bathtub with Ezra Stern.
Get your mind out of the gutter. We were six months old.
Pry and one of us might confess we saved our first kiss for each other.
The most clumsy, wet, sloppy . . . spectacular thirty seconds of my adolescence.
Get into our business and you’ll see two families, closer than blood, torn apart in an instant.
Twenty years later, my „awkward duckling” best friend from childhood,
the boy no one noticed, is a man no one can ignore.

Tell me it’s wrong.
Tell me the boy who always felt like mine is now the man I can’t have.
When we find each other again, everything stands in our way–secrets, lies, promises.
But we didn’t come this far to give up now.
And I know just the move to make if I want to make him mine.

**QUEEN MOVE will have the special release week price of $3.99. After that, the price will increase.** 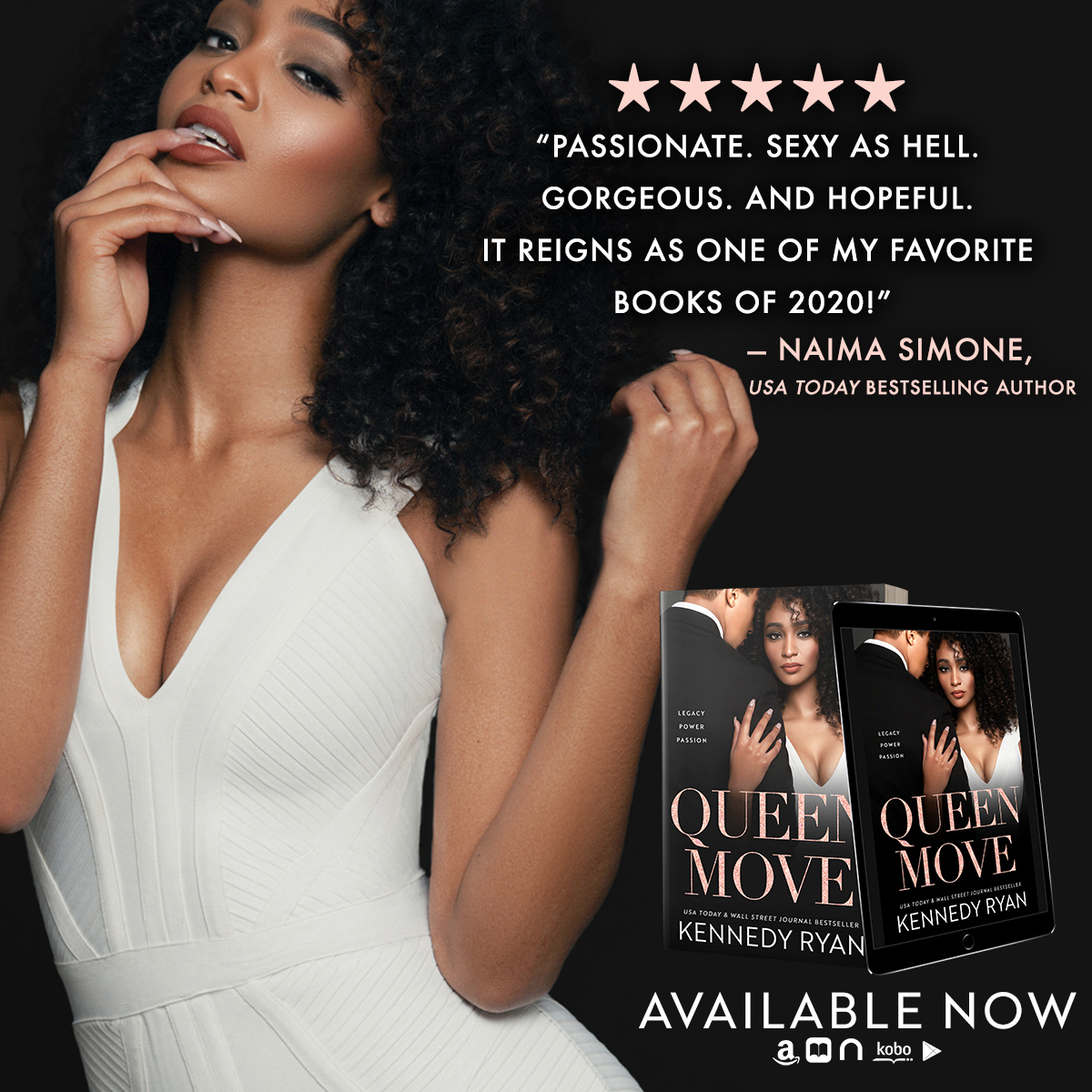 Kennedy Ryan proved once again that she’s second to none. Kimba’s story was a book I was eagerly waiting for, because I knew it would bring me to my knees. And oh boy, how right I was. Queen Move was simply spectacular. This story was so profound and emotional that I felt it deep to the core. This beautiful love story is intertwined with so many important aspects that you can’t prepare for the impact it delivers. Kennedy is able not only to enthral me with her flawless prose, but also influence my worldview. The topics this author raises are always relevant and thought-provoking. And the romance itself is always breathtaking.

Kimba is the quintessence of femininity. She is strong, ambitious, driven, she exudes sex appeal, confidence and intelligence. She lives by her own rules and desires. She is also a perfect mix of sophistication and sass. A true symbol of woman power.

Ezra made me fall in love with him twice. The first time as a young, lost guy who was trying to find himself, and the second time as a mature, responsible and confident man he grew into. I loved his nerdiness and his aspirations to make a change. I also adored his possessiveness and devotion. I can honestly admit that he’s my second favorite hero from Kennedy, right after Grip.

These two are the perfect example of soulmates. No matter what they’ve been through and how long they haven’t seen each other, their bond is unbreakable. Their connection is so deep and palpable that during reading I could feel it floating in the air. They had many obstacles to face and their feelings were tested more than once, but the love they share is something that happens once in a lifetime.

Queen Move is one of these books that will stay with you forever. It’s so beautifully written and the storyline is so remarkable that it instantly goes deep into the heart. It goes beyond the beautiful and touching love story between Kimba and Ezra. In this book Ryan raises many social issues that should give us something to think about. And that’s exactly why I love her work so much- her novels are food not only for my heart, but also for my mind. And Queen Move is a real feast for both. 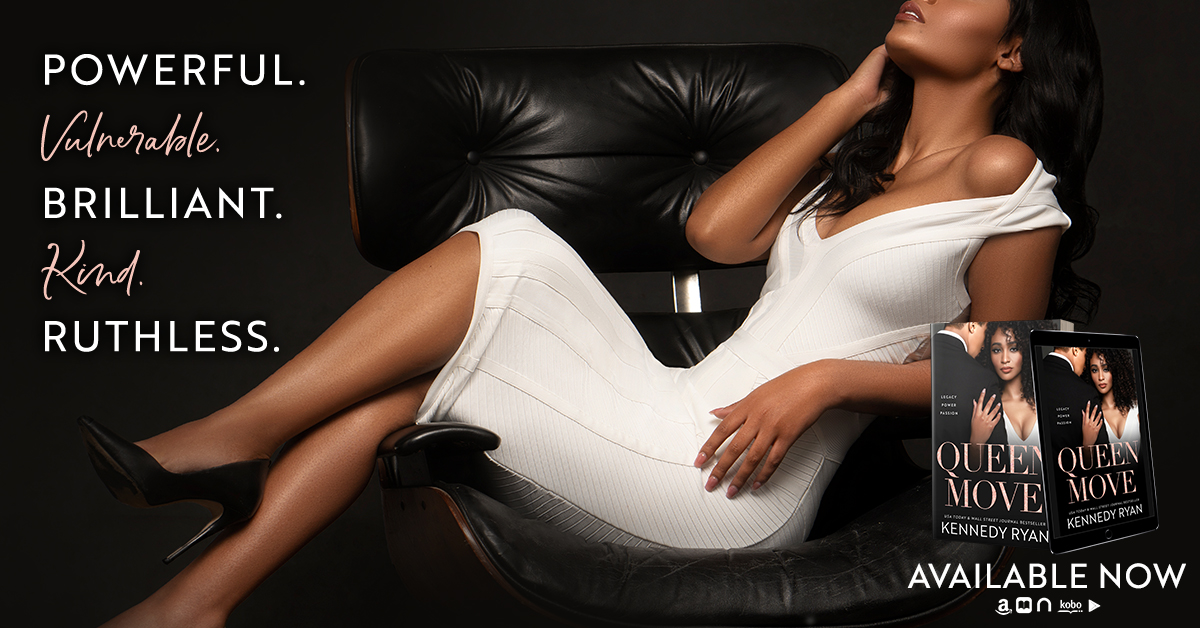 “Huh?” Ezra asks absentmindedly, paying more attention to the flame under his pan than to my compliment. “What’d you say?”

“I said you’re brilliant.” I hold up the iPad I’m using to read his manuscript. “Your book, the YLA story, is incredible, Ez.”

“Oh. Thanks.” He flashes me a smile and then goes back to his French toast. “The key to getting this right is the milk-to-bread ratio.”

I hop off the counter and walk over to stand beside him at the stove. “Would you forget about your French toast for a minute and listen to me?”

“But it’s stuffed French toast.” He takes the pan off the burner and pulls me into his arms. “And I could listen to you all day. What were you saying? Something about me being a handsome, sexy genius?”

“Um…those weren’t my exact words.” I laugh up at him.

“I could have sworn that’s what you said, and I’m never wrong.” He slides his hands over my ass in a pair of his boxer shorts. “Some even say I’m fucking brilliant.”

“They probably just like your big dick,” I whisper and blink up at him as innocently as I can manage.

“I get that a lot.” He drops a kiss on my head and turns back to his French toast. I lean down to rest an elbow on the counter and watch him work.

He pauses mid-toast-flip and slants me a glance. “Are you asking how many people I’ve had sex with?”

Lord above, only eight?!

“Oh.” I straighten and rest my hip against the counter. “What a, um, single-digit number that is.”

What about me? I’m tabulating years of hook-ups, one-night stands, fuck bois and carrying the one.

He glances up from whisking eggs, a small frown puckering his dark brows. “You don’t know what?”

“My number. I don’t know how many people I’ve been with.”

The whisking eggs and whirring refrigerator are the only sounds in the kitchen. I’ve never been embarrassed by my choices. I enjoy sex. I’ve had it with a lot of people. People I really liked…or tolerated…but didn’t want to commit to. I’ve always been safe and never mean about it. I was upfront, and when someone wanted more, I let them know “more” wasn’t an option.

“I just never…” I cross my arms over my stomach, fold one bare foot over the other. “I haven’t been interested in committed relationships. There hasn’t been anyone I wanted that with.”

“Tru.” He stops whisking and gives me the full impact of his undivided attention. His eyes are placid blue. No shadows or undercurrents. “I don’t care.” Ezra pushes the bowl aside and faces me. “But there is something I feel like we should be clear on regarding how you’ve handled sex in the past.”

“You’ve never wanted to commit before,” he says.

“I know I said we could be just sex, no emotional attachments.” He shoves his hands in his pockets. “But I feel like I have to be honest with you. Having you back in my life has been…it’s been exactly what I need, and what I felt last night… I’ve never felt that way before.”

I’m not even sure my heart is beating, but it also feels like there’s a tumult in my chest. “What are you saying, Ez?”

His mouth flattens into a hard line and his jaw hardens to stone. “I want strings.”

“I want strings.” He links our fingers, strokes his thumb across my palm. “Ropes, if necessary. I want anything that keeps you with me and me with you and tells everyone else don’t even think about it.”

I’m stunned and incredibly turned on, but that doesn’t take much where Ezra’s concerned.

“You…you do?” I ask faintly…again.

“I wouldn’t do well sharing you.” 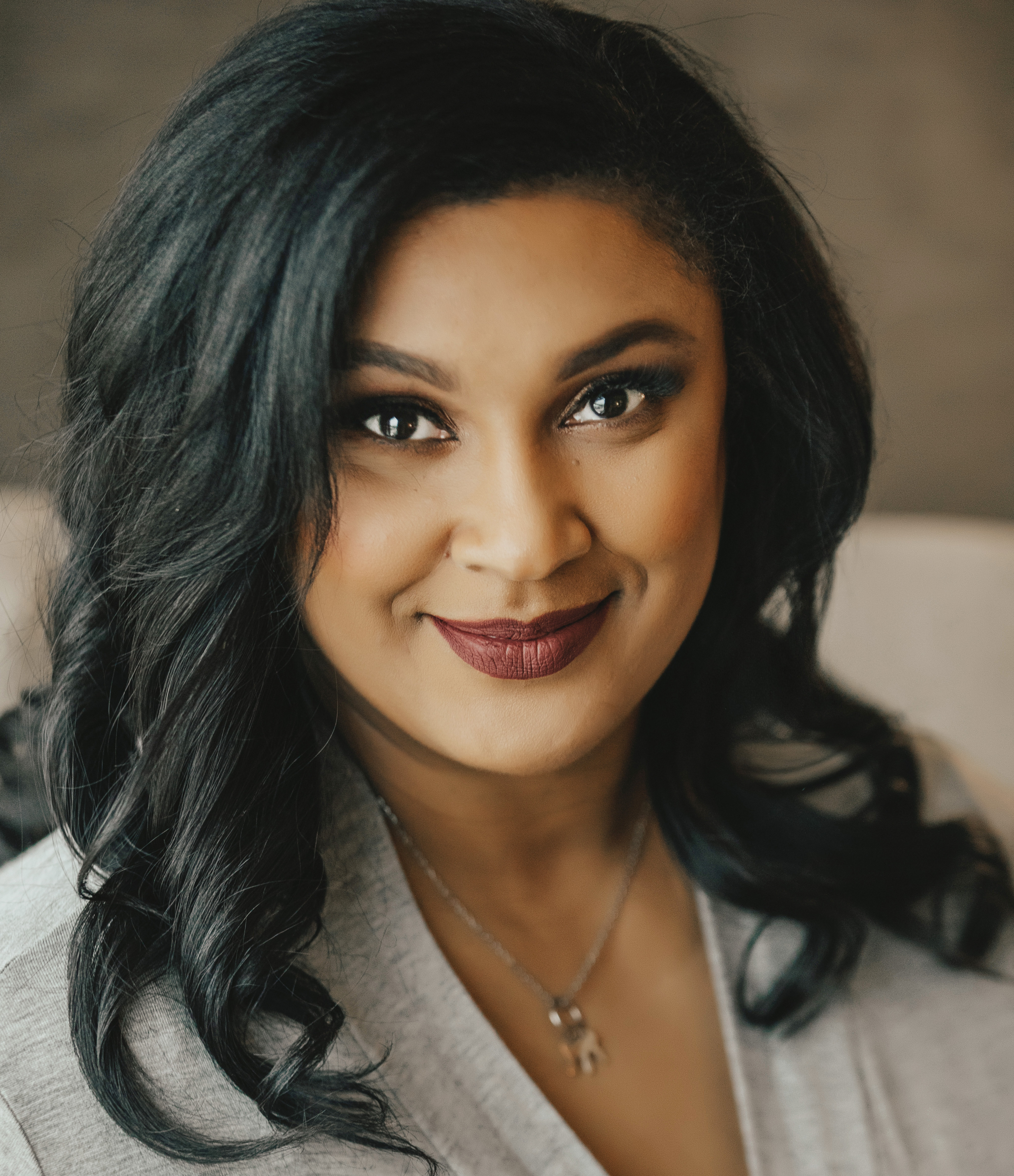 RITA® Award Winner, Wall Street Journal and USA Today Bestseller, Kennedy Ryan writes for women from all walks of life, empowering them and placing them firmly at the center of each story and in charge of their own destinies. Her heroes respect, cherish and lose their minds for the women who capture their hearts

Kennedy and her writings have been featured in Chicken Soup for the Soul, USA Today, Entertainment Weekly, Glamour and many others. She has always leveraged her journalism background to write for charity and non-profit organizations, but has a special passion for raising Autism awareness.The co-founder of LIFT 4 Autism, an annual charitable book auction, she has appeared on Headline News, The Montel Williams Show, NPR and other media outlets as an advocate for ASD families. She is a wife to her lifetime lover and mother to an extraordinary son.

No images found!
Try some other hashtag or username