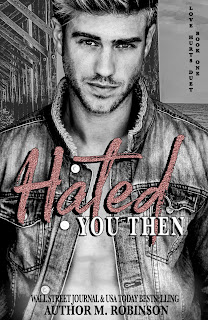 From Wall Street Journal & USA Bestselling Author M. Robinson comes Hated You Then, book 1 in the Love Hurts Duet.
Release Date: September 17th
A coming of age, enemies to lovers, contemporary romance filled with angst and all the feels.
I couldn’t remember a time before her… Harley Jameson.
Before she owned me.
Hated Me.
Needed me.
Before I hated her…
Things were simple.
We had an understanding.
Bully. Fight. Hate. It’s what we did.
Mind. Body. Soul. It’s how we loved.
I thought nothing would ever change that, until everything did.
She was mine.

„She went from the girl I hated the most, to the one I needed more than anything in this world.”

I think that I’m some kind of emotional masochist, because I KNOW that M. Robinson will make a blubbering mess from me, but I’m always coming back for more. And that’t the thing- she’ll break your heart, she’ll make you cry, but her words are so addictive that you just can’t resist! I knew that Harley and Jackson’s story won’t be easy or dotted with hearts and flowers. But Monica Robinson is such a masterful storyteller that it hurts in the best possible way.

Jackson and Harley have known each other forever and they hate each other just as long. They’re constantly competing, teasing and daring each other. Every following year adds a fuel to their turbulent relationship. But as they enter puberty, hatred becomes lined with other incomprehensible feelings. Harley is especially confused, because everyone around says that boys are teasing those girls they secretly like. But it’s really hard to believe with constant insults and pranks. Is there any line that shouldn’t be crossed?

Hated You Then is a hate/love coming of age perfection! What started as a cute banter between kids, with years turned into full-blown war. Jackson and Harley were constantly at each other’s throats. Some of these moments were funny, some of them were really mean and harsh. During this read more than once I wanted to grab these two by the heads and and force them to made up.

When the tragedy came, my heart ached for Jackson and I was scared how grief and despair will affect him. He could be the worst jerk on the planet in one moment, and vulnerable and comfort-needing guy in the next one. I don’t know if it’s a matter of the amount of suffering he has experienced, but I just want to cuddle him and love him and never let him go.

Harley is definitely daddy’s girl. She’s a bold and stubborn biker princess, headstrong and unyielding. She doesn’t back away from anything and her fierceness has no limits.

When most of the time I had a lot of fun reading this book, there were definitely moments when my heart broke into milion pieces. Especially in the last chapter, when M. Robinson showed why she’s called the Queen of Angst and served such a plot twist that I wanted to smash my Kindle, rip all of my hair out and hide in the corner to cry. I don’t know how I am supposed to wait patiently for 2nd book in this duet… My head and heart may explode from agitation. But man, I will suffer the worst torment so I could know the continuation of this story! 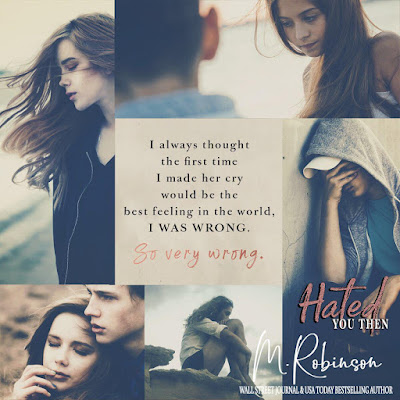 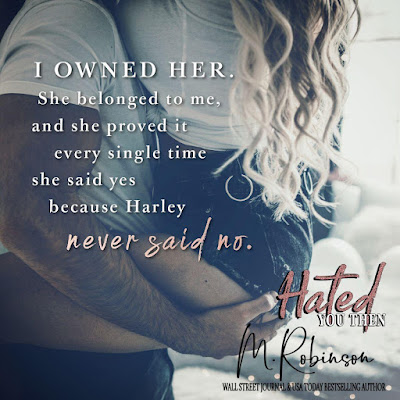 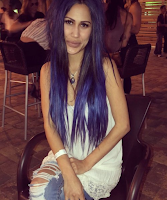 Wall Street Journal & USA Bestselling Author M. Robinson loves to read. She favors anything that has angst, romance, triangles, cheating, love, and of course sex! She has been reading since the Babysitters Club and R.L. Stein.


She was born in New Jersey but was raised in Tampa Fl. She was pursuing her Ph.D in psychology, with two years left. However, she dropped out of school and became a fulltime writer.


She is married to an amazing man who she loves to pieces. They have two German Shepherd mixes, Kobe and trooper, a Wheaten Terrier, Teddy and a Tabby cat, Gio.


She feels blessed to be living her dream.
Website | Facebook|Instagram|Twitter|YouTube Channel| Reader Group

My name is Weronika and I'm 28 years old booklover from Poland.